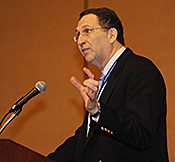 0331-Pruritis-Yosipovitch
Gil Yosipovitch, MD: ‘Not all itches are equal.’

The most common problem dermatologists deal with is itch, and a March 21 session provided insights to help with diagnosis and treatment. Speakers discussed the latest basic science research on the pathology of itch in lymphoma and itch related to liver disease, dealing with itch in pediatric patients, and the many causes of itchy scalp.

“Not all itches are equal. There are different types of itch, and addressing them also has to be different. An itch for a patient with liver disease versus the itch of an atopic dermatitis patient or an itchy scalp is different, and not everything works for every type of itch,” said Gil Yosipovitch, MD, director of “Chronic Pruritus: Bedside to Bench Perspectives.”

One presentation that intrigued many dermatologists was by a leading hepatic researcher, Andreas Kremer, MD, who presented “Cholestatic Itch: Basic Mechanisms and Clinical Management.” Dr. Kremer is from Friedrich-Alexander University of Erlangen, Nuremberg, Germany.

“Major advancements in the last five years have been published by Dr. Kremer and his colleagues in the hepatology literature,” Dr. Yosipovitch said. “He was the first to find a specific mediator, lysophosphatidic acid, and its enzyme, autotaxin. There are markers of cholestatic liver disease itch, and he has shown nicely that these chemical mediators have a significant role as biomarkers for cholestatic itch.”

Drugs, such as rifampicin, and the technique of albumin dialysis have previously been reported to reduce the severity of hepatic itch, but unknown mechanisms have been shown by Dr. Kremer to reduce these mediators, suggesting these mediators have a key role in this type of itch, he said.

“I got a lot of feedback from the audience that this was one of the most fascinating talks because he combined both the basic science and an understanding of why and what to do with these types of challenging patients,” said Dr. Yosipovitch, professor and chair of the department of dermatology at Temple University School of Medicine and director of the Temple Itch Center.

Alain H. Rook, MD, professor of dermatology at Perelman School of Medicine, University of Pennsylvania, discussed the role of the cytokine IL-31 in itch in patients with cutaneous T-cell lymphoma (CTCL). He reported that patients with CTCL had clinically meaningful reductions in pruritus when treated with romidepsin, which helped reduce levels of IL-31 and T-cells.

Joan Guitart, MD, professor of dermatology and pathology at Feinberg School of Medicine, Northwestern University, also addressed pruritus in patients with CTCL. He discussed the severity of pruritus in this patient population and symptoms, such as insomnia, fatigue, stress, despair, and depression. He discussed treatments that included antidepressants; the use of gabapentin and pregabalin; opioid antagonists; new anti-lymphoma drugs; and histone deacetylase inhibitors (HDAC) such as vorinostat and romidepsin.

“All dermatologists in pediatrics see itch in atopic eczema as a major problem with significant impact on patients and parents alike,” Dr. Yosipovitch said. “We must remember that there can be other types of itch, not just eczema.”

Sheila Fallon Friedlander, MD, professor of clinical medicine and pediatrics at the University of California, San Diego, discussed pruritus related to cutaneous disorders beyond atopic dermatitis, such as contact dermatitis and scabies. She said that the congenital blistering disorder epidermolysis bullosa, burns, and cancer in pediatric patients can cause severe itch that affects quality of life, and has not been well-addressed
Amy S. Paller, MD, MSc, chair of the department of dermatology at Feinberg School of Medicine, discussed the basic science of atopic dermatitis in itch, including the interaction between nerves and cytokines. Several new pathways that mediate nonhistaminergic itch have been discovered, and IL-31 and TSLP are key cytokines that mediate itch.
Sarah L. Chamlin, MD, professor of pediatrics and dermatology at Feinberg School of Medicine, discussed the psychosocial impact of pruritus. “She highlighted the fact that the severity and the suffering of itch in this population is similar to diseases such as cystic fibrosis and other life-threatening diseases that have so much impact on their quality of life,” Dr. Yosipovitch said. “It has a psychosocial impact way beyond just the itch — the lack of sleep is causing behaviors such as ADHD. This is an area that needs more addressing because it has a lot of implications on families as a whole.”
Wynnis Tom, MD, associate clinical professor at the University of California, San Diego, discussed options beyond topical steroids for treating patients with itch with different mechanisms of treatment. These options include behavior modification and coaching, nonpharmacologic interventions, topical interventions, and systemic therapies.
In his presentation, Dr. Yosipovitch described the pathophysiology and management of scalp itch and discussed causes of skin inflammation, such as seborrheic dermatitis, psoriasis, and scarring alopecia, focusing on central centrifugal scarring alopecia in African-Americans.

In addition, scalp itch is common in the elderly, and peripheral neuropathy, such as diabetes and postherpetic neuralgia, can present with itchy scalp. Scalp itch also is associated with trichotillomania, depression and stress, and therapies can include several nonsteroidal topical medications, systemic treatments such as gabapentin, and even a holistic approach using acupuncture.

“The awareness that there is itch beyond eczema and there are new treatments on the horizon to address itch is very exciting,” he said. “I think the buzz is that we now know more to address the different types of itch, and that is encouraging for dermatologists. There are a lot of opportunities for evolving treatments due to the fact that we have increased knowledge.