Tips from the Masters of Dermatology 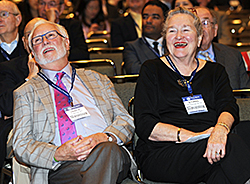 What is a master? Dictionaries have multiple definitions, including a master as a worker qualified to teach an apprentice.

“The AAD has a different definition of a master,” said Richard Scher, MD, clinical professor of dermatology at Weill Cornell Medical College. “AAD says a master is a significant contributor to the specialty with leadership/educational qualifications and a national/international audience. My own definition is someone lucky enough and old enough to get in on the ground floor of an important but neglected area and who loves to teach residents!”

Dr. Scher was one of a dozen presenters at the March 21 “Masters of Dermatology” session. And while each master created a unique track to success, all made their marks in what was, at the time, an unexplored corner of dermatology.

“These are all strong clinicians who have made significant contributions to dermatology,” said session director William James, MD, Paul R. Gross professor of dermatology at the University of Pennsylvania Perelman School of Medicine. “These are people who can serve as role models for our future masters.”

“Nail disorders are still the last frontier in dermatology,” he said.

Rick Sontheimer, MD, professor of dermatology at the University of Utah School of Medicine, started with the right mentor at the right time. He helped launch subacute cutaneous lupus erythematosus (SCLE) at the 1980 AAD Annual Meeting in San Francisco. The presentation was based on work he did as a fellow working with the late James Gilliam, MD, then chair of dermatology at the University of Texas Southwestern Medical Center.

SCLE had as many detractors as supporters in the early years, Dr. Sontheimer said. But even the most ardent opponents eventually accepted the growing tide of evidence that SCLE is real.

“People got offended, as is often the case when you bring something new to medicine,” he said. “What we had were patients with a genetic commonality and an autoantibody commonality. Neither of those were seen in systemic lupus.”

Establishing viable and sustainable mentor-protégé relationships is key to success, he said.

“Some people are so good they don’t need mentors,” Dr. Sontheimer said. “The rest of us benefit by having a more experienced person take our hands and show us the way forward.”

Mary Williams, MD, adjunct professor of dermatology and pediatrics at the University of California, San Francisco, found success in a combination of aspirations and good fortune. Trained as a pediatrician and aspiring to work in an academic center, she wanted a career that fit with family life.

“I was looking for a subspecialty that would fit with motherhood,” Dr. Williams said. “When I discovered pediatric dermatology, I was thinking I could do this and be home for dinner every night. I had no idea I had picked the jackpot of all medical subspecialties.”

“Patients often have needs that you cannot meet in a clinical setting,” she said. “Advocacy groups can fill that need. They can also put you, as a physician, in contact with people and resources you might otherwise not know about. I would urge every dermatologist to get involved in patient advocacy groups early in their careers.”

Another tip: get involved in research. You won’t know if you like it until you try it, she said, and research can be a lifelong career boost.

“There is clearly more work to be done in the ichthyoses, more genes to be found, more pathways to be traced. There is enough in this one area to fill many careers.” Dr. Williams said.

Jon Hanifin, professor of dermatology at Oregon Health Sciences University, built his career on atopic dermatitis. AD is a tough disease. So are AD patients.

“I didn’t like eczema patients when I started,” Dr. Hanifin said. “Patients or their parents were resentful and chilly with doctors. Our medical efforts were very often impotent, and they knew it. What I eventually realized is that these are smart, savvy patients. What they know about eczema can put most doctors to shame.”

In the 1970s, atopic dermatitis carried multiple, often inconsistent, labels. Dr. Hanifin’s initial attempt to build basic diagnostic criteria was published in 1977 and presented at the first international symposium on atopic dermatitis, in 1980.

The emergence of consistent definitions of atopic dermatitis helped spur lab studies and clinical trials. But the path from bench to bedside can be slow and tortuous. The first lab studies showing that increased phosphodiesterase (PDE) blunts cyclic AMP control of cell reactions in AD and atopy were published in 1982. PDE inhibitors have been in use for erectile dysfunction and other indications since 1998, but improved inhibitors for AD are still in clinical trials.

“Most people with AD are young kids, and we are all hesitant to test new agents in young kids. The FDA is even more hesitant. We are hoping that the FDA is going to relax a little bit and approve new topicals,” Dr. Hanifin said.